A small game for the Commodore 64.

You work for a package delivery company in a small city. Your job is to drive around in a light red car, picking up and delivering packages at various destinations, based on instructions from your manager.

You get paid according to the number of packages delivered and how fast you are able to deliver them.

When you are instructed to pick up some packages, a white "X" on a red background will mark the destination. The mark will start blinking when you arrive there. You may then press the fire button to pick up the packages. If you don't reach the destination within a certain time limit, you will be fired by your manager! (You will be reminded to hurry up first, though.)

After the packages have been picked up, you'll be told where to deliver them, one at a time. Use the fire button to make the delivery when you arrive at each destination.

Provided you're fast enough, you will be paid $12 for a delivery. The amount will decrease by $1 at regular intervals. If the amount becomes negative, you will be fired!

If all packages from the same pick-up are delivered for $10 or more, you will receive an additional $5 bonus per package. Yay!

There are other cars driving around the city, and you need to avoid crashing into them. If you crash into another car, you will be fired!

You start working early in the morning, and as the day progresses there will be more cars in the streets, they will drive faster, and your manager will give you less time for each pick-up and delivery!

U-turns are possible at street intersections.

Press the fire button to pick up and deliver packages at destinations.

The game has been developed for and tested on PAL machines. It should also work on NTSC, but will run faster.

The PRG file can be launched in a Commodore 64 emulator such as VICE. 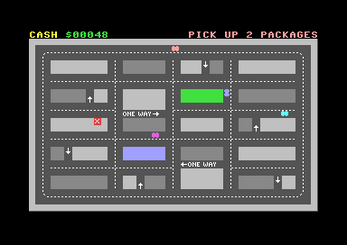 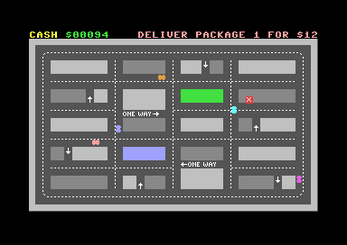 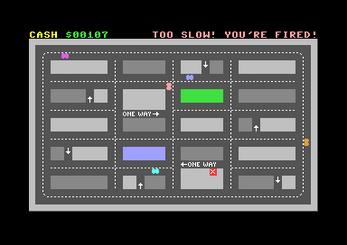